How many heavens are there? 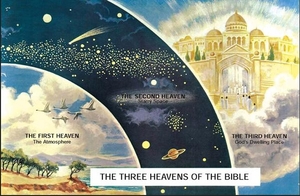 What is he talking about? Some religions have adopted this into their theology saying there are three levels of heaven with different degrees of glory, and a person's admittance into any one of them depends on their performance on Earth. Hogwash. A simple hermeneutic study would show that this is a cultural reference that the original audience would have understood without second thought.

So what is the third heaven? Well, the Jewish people referred to the air where the birds fly and the clouds float as the First Heaven. The sun, moon and starts existed in the Second Heaven. Jehovah Himself resided in the Third Heaven. Paul was saying he was caught up to heaven where God was. Nothing mysterious about it. Did you know this? Now you do.

Tidbits of wisdom and insights into some things you may never have known or thought about. Have a question.. submit it below.

Please feel free to contact us about anything. If you would like to submit a calendar event, a praise, a suggestion, or ask a question you can do so here: